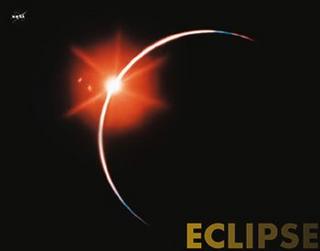 There is a New Moon next week on March 29th. This new moon is also a solar eclipse. The Sun and Moon connect at eight degrees of Aries.

This particular solar eclipse series last occurred in March of 1988 (at 28 degrees of Pisces). According to Bernadette Brady's book Predictive Astrology

this eclipse series is centered around inventiveness and flashes of genius;

The individual will have intuitive leaps, insights, good ideas, visions or vivid dreams. This new-found-inspiration will pull the person away from his or her social life or relationship, thereby causing strain in the private life. This is a time when the person needs to be free, if only for a few weeks.

The Uranus/Mercury conjunction at 13 degrees of Pisces on the day of this new Moon seems to emphasize the particular vibe of this Saros Series.

This new moon solar eclipse will particularly impact those people who have personal planets aspecting between six and ten degrees of Aries. It will also be felt by those Aquarians who have a planet at around 22 degrees of Aquarius, as this is where Venus is placed during this new Moon, closely trining Mars in Gemini.
Posted by Isadora at Saturday, March 25, 2006 1 comment: