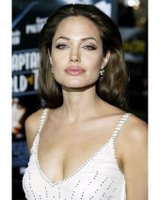 Angelina Jolie fascinates me these days. I think she might have a profound impact on the current Hollywood zeitgeist. She seems to be quite different from the typical shopping-crazed Hollywood celebrity. The photos I've seen of her in the last few months usually feature the same low-key black clothes and even the same handbag. More significantly she has probably done more for raising the image of third world adoption than anyone else.

Angelina Jolie is a Gemini born June 4th 1975. She has some very lucky aspects in her natal chart. Her Venus is conjunct her Ascendant and that would jive astrologically with her mesmerizing beauty. The ascendant is all about how we appear to others, so those people who are lucky to have Venus conjunct Ascendant are bound to be physically attractive regardless of which Zodiac sign this is in. In her case, this Venus in Cancer is also squared Uranus at 29 degrees of Libra, so that adds even more magnetic appeal to her appearance. Jolie was named the most beautiful woman in the world by People Magazine this year.

She's set her goal as that of helping orphaned children in the developing world. Recently she was spotted leaving a Paris hotel with some not so light reading under her arm. It was a copy of Condemned to Repeat: The Paradox of Humanitarian Action. The thesis of this book is about how charity agencies should be more ethical and avoid supporting the oppressors of people in the Third World.

In her earlier years Angelina was a troubled teenager but she has found a way to move beyond the ego and attain a higher level of happiness via this central cause in her life.

Angelina has Jupiter exactly conjunct Midheaven in Aries. Also found there, a few degrees off the Midheaven in her 9th house, is a Moon/Mars conjunction which is sextile her 11th house Sun in Gemini and trine Neptune is Sagittarius. With such a strong natal chart and sense of justice, Angelina could have great influence in elevating the Hollywood zeitgeist to a new plane.

See a better resolution of her natal chart at AstroDatabank. 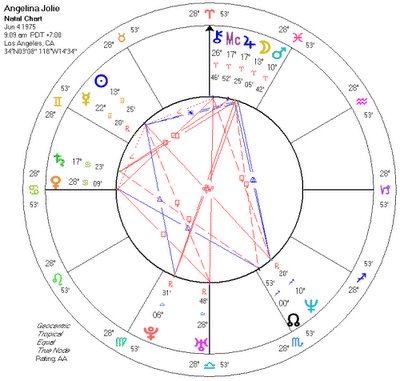