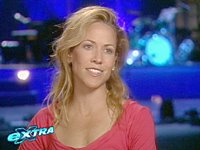 Sheryl Crow is another extreme Aquarian. She has Sun, Venus, Mercury, Mars, Jupiter and Saturn in Aquarius. She was born February 11th, 1962. Her birth time is unknown. Her Aquarius Sun is at 22 degrees Aquarius and it squares her Moon at about 22 degrees Taurus. See her approximate natal chart here.

Sheryl Crow is a famous blues rock star and has sold over 25 million records. She has never married, but was engaged to be married this spring. Her fiancee was Lance Armstrong, the famous Tour De France champion. Unfortunately they just announced their split-up last week.

Crow's birth chart is such that the recent grand cross heavy duty transits (involving Saturn, Mars, Jupiter and Neptune) have had a major impact on her chart. The worst is now over (although without knowing the Ascendant placement we can't know for sure).

Sheryl Crow is about to embark on a tour for her new album which she has named "Wildflower". On her website she says Wildflower is deeply influenced by her relationship with Lance Armstrong.
Posted by Isadora at Saturday, February 11, 2006 1 comment: