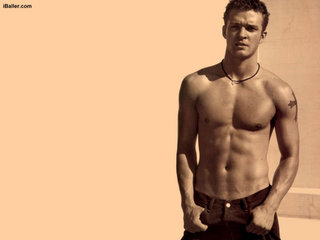 Justin Timberlake is a famous Aquarian musician and actor born on January 31, 1981.

His ascendant is in dramatic Leo (and conjunct the most powerful of fixed stars; Regulus).

His Sun is at 12 degrees Aquarius with a Moon in Sagittarius.

Justin's Pluto is trine his Mars and sextile his Moon.

He's got a complex and energetic natal chart, with Mars and Mercury conjunct his Descendant in Aquarius.

He met Britney Spears when he was only about 12 years old and they started dating when he was about sixteen. They were together for many years. His Sun in Aquarius is exactly conjunct her Moon in Aquarius. The Sun conjunct Moon in comparison charts is often considered the single most powerful astrological sign of true love between a man and a woman. In their case, his Moon is also in the same sign as Britney's Sun (Sagittarius). It seemed that they were meant to be, but they split up for secret reasons back in 2002.

Justin is currently in a relationship with Cameron Diaz. There are rumors swirling that the couple may be on the verge of a break-up.

Justin has been undergoing a difficult Pluto transit recently. His Moon is conjunct Neptune at 24 degrees Sagittarius. Pluto has been sitting heavily on this degree in Sagittarius for at least a year. And it is now doing one more round, and stationing directly on his Moon/Neptune over the next few months. Saturn is also opposing his Sun at this time. 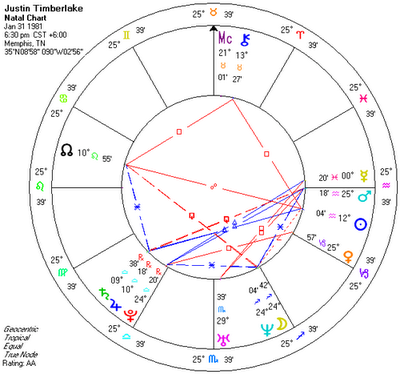 See AstroDataBank for more info about his natal chart.

Here's an interview he did with Barbara Walters a few years ago, just after his break-up with Britney Spears. Here we see he is somewhat of a perfectionist who works hard and likes things clean and tidy. (His chart ruler, the Sun, is in Aquarius in the sixth house.)

What more interesting things do you see about his chart here?
Posted by Isadora at Friday, June 23, 2006 4 comments:

Meg Wilson has created a poll that might interest astrology buffs. She asks if it's possible to guess a person's zodiac sign based on their appearance.

Most astrologers claim you can make an educated guess as to a person's rising sign based on their physical appearance. This would be even more likely if the Ascendant sign also holds some other personal planets (such as Sun, Moon, Venus, Mars, or Mercury) or if it is heavily aspected and prominent in the birth chart.

Note that the two celebrities Meg has chosen here have both their Sun and Ascendant together in the same signs. In fact they both have a Sun/Ascendant conjunction. A Sun/Ascendant conjunction can throw the guess off by giving an Aries flavor to the appearance of any rising zodiac sign. I would guess that's where the strong noses come in for both these guys ;-)

This poll is free for anyone to place on their website. So let me know if you decide to do this and I'll link to your site to get more votes going.
Posted by Isadora at Thursday, June 15, 2006 4 comments: