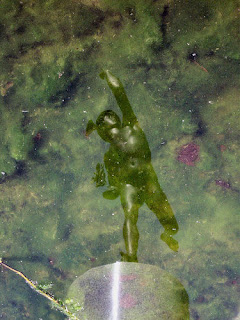 Mercury is retrograding in Aquarius now. Mercury retrogrades for about a month three times a year. During a Mercury retrograde astrologers usually note that you can expect things to go wrong in terms of signing contracts, arranging meetings, mail being displaced or misunderstood, electronic instruments acting up and other such mishaps.

In this last retrograde, Mercury went retrograde at 10 Pisces on February 13th. It will station direct at 25 degrees Aquarius on March 6th.

In my own case, I have not been watching the daily movements of the planets for a while. So I wasn't even aware that we were in a Mercury retrograde period now. But yesterday was one of those days where everything went wrong. I left for a doctor's appointment at the last minute to be on time but my car wouldn't start. The remote control that opens my car door was not working at all. I was late for the appointment as I called for a taxi. Then I went back out to try to open the car door again, and some very surreal Mercurial person ran up to me to ask if I had a cell phone as he urgently needed to call someone as he was trying to rent a basement suite from one of my neighbours four doors down and needed to try to call them as he was not sure he had the right house because no one was answering. This guy was the very impersonation of Mercury. I will not go into the vivid description, but just trust me. I didn't have a cell, but I let him come in to use my phone as I waited for the taxi. His conversation was classic Mercury; very fast and fluent but not really there or securely grounded.

I caught the cab - I only splurge on a taxi a couple of times a year - and I think taxi drivers are a very Mercurial occupation - and he told me all about what to do about my remote control expired battery.

When I got back I came home to a huge glitch in my computer. I won't go into details but it basically was a real downer and means many hours of work to correct. Something I haven't done yet and need to rely on my programmer friend to help me with.

Later on that evening, I had been looking forward to my husband going out for dinner with his friend and our toddler. I was looking forward to a rare night in the house alone. I told him about the car problem and he said it was only a case of new batteries needed for the remote control. But this did not solve it. (Mercury retrograde was square his Sun). There was no dinner ready for our little boy, he was hungry and showing all the irritable signs, my husband was out trying to restart the battery with his work van and nothing worked. Finally they did leave to go out for dinner on their own (on foot) but after much delay and irritability.

I've gone on long enough but in summary today there were more jumbled plans and missed appointments.

Mercury retrograde when it affects a personal point in your chart will be a real nuisance. But it's not usually anything really serious. It's usually more of a nuisance than a disaster. For a real disaster other transits usually have to be involved.

The beautiful photo above is by Xerones.
Posted by Isadora at Wednesday, February 28, 2007 9 comments: